As a Catholic (notice how I left the word “devout” out of that), I’m intrigued every time I see the word “exorcism” in the title of a movie. Granted it should begin and end with William Friedken’s masterpiece “The Exorcist”, but I digress. As the main character, Cotton (Patrick Fabian) tells us in the movie, exorcisms aren’t only limited to the Catholic faith. In fact, every religion has some sort of exorcism to get demons out of a possessed soul. Hmmm, ok, if you believe in that sort of thing. I do remember a movie a few years back entitled “The Exorcism of Emily Rose” that was based on a true story and, quite frankly, it scared the hell out of me (pardon the pun). So we’ve got demons in possession of people, pastors and priests trying to get rid of them and a family who doesn’t know what’s going on. I suppose the best piece of advice is to pray you or someone you love never gets possessed by a demon.

We meet charismatic pastor Cotton Marcus (Patrick Fabian) as he tells us his history of religion. I should note that this movie is filmed in a documentary sort of manner, with the main characters having “confessionals” of sorts to the camera. Cotton’s faith isn’t what it used to be and even though he’s the son of a pastor, he’s figured out how to “sell” his sermons as opposed to really believing in what he’s saying. He gets requests from his web site to perform exorcisms and, as you might have guessed, he’s going to oblige one last family by performing one final exorcism. As Cotton and his camera crew head down to the boondocks of southern Louisiana, they meet the Sweetzer family. The youngest, Nell (Ashley Bell) is thought to be possessed by a demon. Cotton sets up his show, literally, showing us all the tricks of the trade to “exorcise” the demon. He performs the ceremony, collects the money and is on his way. But…things don’t go as planned and they’re lured back to the homestead. Is Nell’s possession for real or is there a more sinister force at work?

“The Last Exorcism” surprised me a bit in that I had no preconceived notion of what was going to happen when I popped the disc in. I was looking for something scary to watch and I figured a girl possessed would fit the bill. I have to admit that the “Blair Witch” style of filmmaking is a bit hit or miss, but it worked here. It’s a very small cast and the majority of the face time is with Fabian. Given the subject matter, it’s up to the viewer if they choose to believe what’s happening on screen. Is it all smoke and mirrors or are people genuinely possessed? The style of the film works in this case and it’s amazing how this sort of film can emotionally affect the viewer moreso than a traditional “scripted” movie. “The Last Exorcism” is a well-made film and for those that are into this genre, you could do a lot worse.

Blu-ray has a lot of advantages in both the audio and video department, but with a movie like this it’s a bit hard to justify the Blu-ray being “better” than the standard DVD. The 1.78:1 AVC HD transfer looks good with sharply defined edges, but it still has that documentary look and feel to it. There’s a bit of motion in some of the background scenes and some of the other scenes seem to have a bit of a halo effect going on. So while the resolution is technically increased over that of the standard DVD, it’s hard to tell a major difference between the two.

The DTS HD Master Audio soundtrack is also rather limited save for a few key moments. I’d say that about 95% of the film is entirely dialogue-driven and it’s what we might expect from a film of this nature. There are a few instances, at the beginning of the film, when the sound does take effect though. There are some rocks thrown at a car, a creaking door and the like – these all sound pretty darn good when watching the movie. There aren’t really a lot of ambient surround effects to take note of, but what little there are add a bit to the film. This won’t knock your socks off, but then again it’s not supposed to.

This Blu-ray does have a few more extras that than of the standard DVD (also included in the set, I might add). We get a trio of commentary tracks and the last is a “bonus” that’s not included on the DVD. The main draw here is the influence of horror aficionado Eli Roth who served as the film’s producer and we also get plenty of details about the style of the movie, the shoot and the location. Pretty standard stuff here. The final commentary track has participants from actual exorcisms which is kind of interesting how they compare and contrast what happens during these ceremonies. We get a “Making of…” featurette as well as some interviews with real people who have been exorcised as well as some audition footage from the lead actors (Patrick Fabian, Ashley Bell, etc.). The original theatrical trailer is also included and the disc is BD-Live enabled with Lionsgate’s menu system. 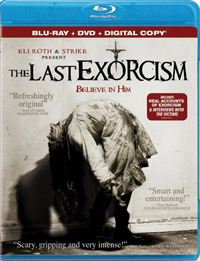