Making a movie about a war isn’t what it used to be. It’s been nearly 60 years since World War II and over 30 years since Vietnam ended. Those two wars have provided Hollywood with enough substance to base a LOT of movies on, a few hundred at least. So, now that this is the 21st century, there hasn’t been any major war involving the United States in almost 10 years, what do we make war movies about? Logic says that we turn to the most recent war…The Gulf War. Most all of us can remember it because we watched it on CNN, heck, a lot of people probably have the whole thing on VHS tape! The Persian Gulf War (The Gulf War) was a different type of war, not one that had the threat of using nuclear weapons as defense, we used those twice and they have never since been used in combat since then. This war was about night-vision goggles, a renewed sense of patriotism and a man named Sadaam. Director David O. Russell, who so brilliantly helmed one of my favorite movies, Flirting with Disaster, has taken the saga (all 8 weeks of it) of the Gulf War and turned it into something that we can all watch, and all relate to. In this, we find four American soldiers who have yet to see any action. Major Archie Gates, played to a tee by George Clooney is in his ending days in the Army, his career has yet to spur him into the upper ranks. Sergeant Troy Barlow has a wife and a new baby and has his life on track, he like most of the other soldiers was in the Army reserve as a means to help the family budget. Friend, Conrad Vig (Spike Jonze) aspires to be Troy, as so subtly displayed in the opening subtitles. Lastly, we have Chief Elgin, played by none other than rapper-turned-actor, Ice Cube. Ice Cube, to me, is one of a very few rappers who has managed to turn his career into a very notable acting career. Anyhow, the war is over.

The war is over and we find the soldiers celebrating, drinking, putting on suntan oil and getting some rays in the Iraqi desert heat. Upon a strip search of the locals, Conrad and Troy come upon a map, found in the most precarious of places, that leads to something very important. After all, if it’s important enough to squeeze in between your cheeks, it must be pretty important. We then find the four main characters heading off to follow this treasure map. What will they find? We don’t know…What we do know is that President Bush has declared that the war was over, there was a cease-fire and to the locals, the Americans were nothing more than insects. President Bush had told the Iraqi’s to rise up against Sadaam Hussein, and that they did…only they didn’t have the American’s support and they were getting slaughtered. What Archie, Troy, Chief and Conrad set out to do is find the stolen Gold Bouillon that was stolen from Hussien’s empire, take it and head back home very, very wealthy men. Is it that easy? Of course not. Their consciences get the best of them, situations that are out of their control escalate and suddenly the money is the last thing on their mind. Losing friends along the way, and gaining new ones, the soldiers all of the sudden find themselves in the middle of an uprising. They, being Americans, are pretty much free to do whatever they want. They do break the cease-fire, which results in the capture of Troy by the enemies and ultimately leads to one of their deaths…

Three Kings is a so much more than a retelling of some of what happened in the Gulf War, it’s a modern work of art. David O. Russell has created something here that is humorous, saddening, thrilling and something that we’ve never seen before. The way in which it’s shot, in which there’s actually a disclaimer before the movie starts, is similar to that of Saving Private Ryan. Where the film differs from Private Ryan is the elements sprinkled in between, and this reaches a new audience of viewers. Whereas Private Ryan was a movie for our fathers, this is a movie for this generation. If you haven’t seen Three Kings, take a look, you’ll be missing a lot more if you choose not to view it.

“Three Kings” has a very unique visual style applied to it and the use of polarization gives it this look. The skies are a deep, dark blue and the ground a washed out, nearly white, appearance to it. The background is often gritty (intentionally so) and the flesh tones that of soldiers who’ve spent one too many days in the desert heat. None of this is bad, however, as it does make for an effective and interesting look and feel to the film. Blu-ray has given this a bit of added texture and Warner’s 2.40:1 VC-1 HD transfer simply dazzles along the way. While some errors persist, they’re few and far between and suffice it to say that “Three Kings” is one of the more interesting transfers I’ve seen to date.

The previous Dolby Digital 5.1 soundtrack has been replaced by a DTS HD Master Audio mix that doesn’t let up for a minute. At the time, “Three Kings” was coming on the heels of “Saving Private Ryan” and though on an audio level, these two aren’t equals this one isn’t that far behind. A very robust front stage is used to convey all sorts of action. Bullets whiz by, making use of all the speakers, LFE are active and the surrounds are almost always constantly humming away. If you’re so inclined, turn the volume a few inches to the right (or left, depending on how your system is set up) and let it do its thing. It’s worth it.

It’s been a decade since “Three Kings” first made an appearance on standard DVD and now that this film is (finally) on Blu-ray, we’ve got essentially the same bevy of supplements. The commentary by director David O. Russell is unique to the point where it’s almost weird, but it does tend to fit with the theme of the movie. We also get a peek at his video journal with his initial meetings with Ice Cube, Mark Whalberg and George Clooney to fellow star Spike Jonze on a New York City street corner. There’s a second commentary with the producers that’s a little more dull, but it does manage to shed a little light as to what it took to make the film. There are some additional scenes as well as a featurette “Under the Bunker: On the set of ?Three Kings'” which is more of a production diary as opposed to an actual featuette, but nonetheless enjoyable. 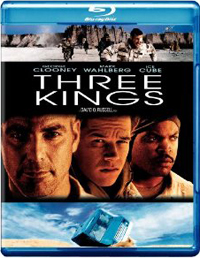